Now After The Tremendous Success Of Note Edge And Note 4, SAMSUNG Is Now Eyeing To Launch Galaxy S6 The Sixth Phone In The Galaxy S Line Up.

FINALLY, THE WAIT IS OVER! SAMSUNG Galaxy S6, a phone full of style and glamour, an entirely redesigned phone with amazing features in it. This great phone is going to take-off somewhere in April 2015 to penetrate the market all over the world.  The great thing about this phone is its metal body that is eventually a relief for the SAMSUNG users that were deprived of the plastic body. This requisite change is going to bring a lot of profits and fame for the SAMSUNG by the launch of this Smartphone.

Well, it is interesting to know that SAMSUNG Galaxy S6 alone is not coming, but SAMSUNG is going to unveil Galaxy S6 Edge with a curved body just like Note Edge.

It’s rumoured that SAMSUNG is introducing wireless chargers with S6 and also selling its own charging pucks that also takes less time to charge the phone.

There are some other features that SAMSUNG has introduced in this new phone some of them are launching of camera instantly just by double tapping on the home button. In addition to it this phone is coming with not SD card slot in it rather it has UFS 2.0 tech that is a fast flash memory than SD card.

As stated earlier that SAMSUNG Galaxy S6 is having metal body that is itself an amazing thing to know about this phone. Along with a metal body, and the induction of Gorilla Glass 4 is making the looks of this phone stunning. 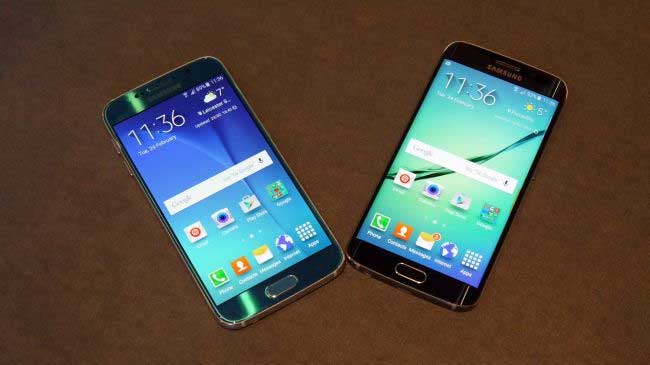 This jewelled metal look phone is coming with four colours with an impressive size not so big (only 5.1 Inches). The cute thing about its jewel-like façade is its changes the colour when light knockouts it.

So the SAMSUNG Galaxy S6 and S6 Edge are the Upcoming Phones That Are Going to Launch by SAMSUN in few days and are ready to make the people mad on them, with their new stylish designs and wonderful different features in them. SO GET READY TO GRAB!!