It was a reunion that the family definitely did not anticipate—it was like something out of a movie!

After 20 years, a mom reunited with her long-lost daughter, and during her son’s wedding no less. Yes, it’s as peculiar as peculiar gets. Although some claim that events of this nature simply do not occur, they did occur to a family in China.

An elderly woman and her family gladly travelled to their son’s wedding on March 31, 2021. She had no idea that she would be meeting her own daughter, who had been missing for nearly two decades. 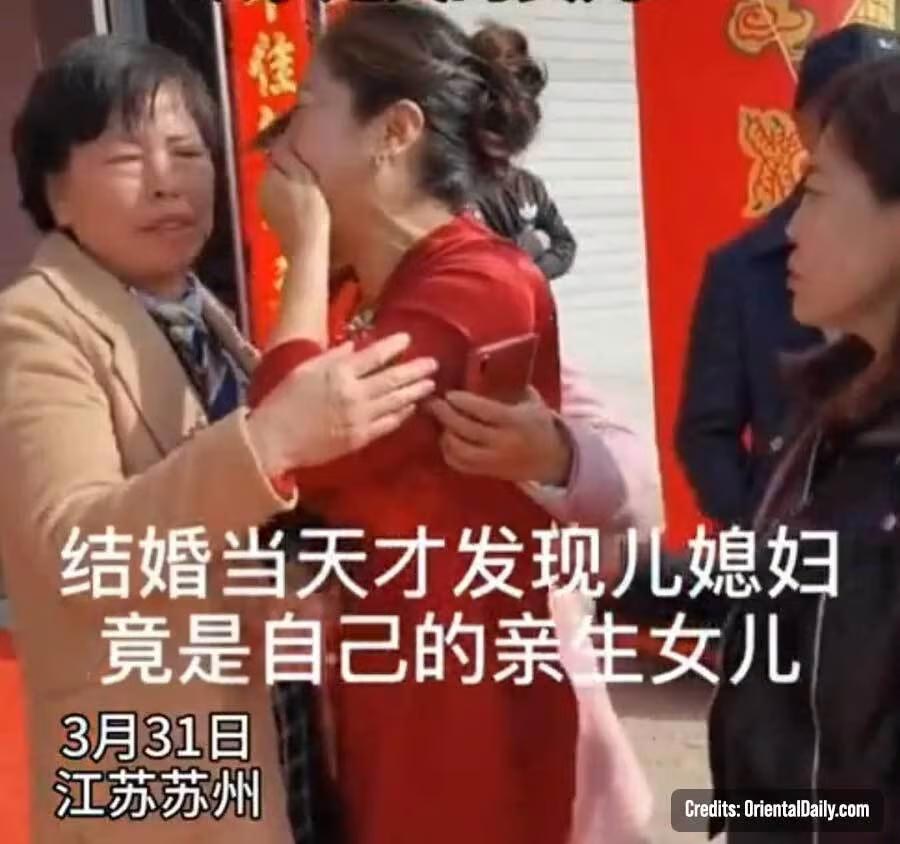 The mom and her kid arrived to the wedding location and greeted the bride’s family. The bride then arrived, and everyone exchanged greetings.

The mother of the bride-to-be had only spoken to her daughter-in-law over the phone a few times and had never met her.

When she saw the bride, she became overjoyed. The girl was exquisite in her wedding dress and was quite attractive. She was speaking to her when all of a sudden she saw a birthmark on the bride’s hand.

She saw the mark right away and continued to focus on it throughout their talk.

She then went over to the bride’s parents and enquired as to whether or not the bride was their “genuine daughter.”

“Did you, by any chance, adopt your daughter?” she asked.

The parents were astounded by her newfound curiosity and questioned her as to why, in turn.

The woman then went on to explain that she had lost her daughter twenty years prior and that she shared the same birthmark with the couple’s daughter on her hand. The bride’s parents first objected, but they eventually admitted that she wasn’t their real daughter and that they had adopted her after finding her wandering the streets one day.

That birthmark had been permanently inscribed on the woman’s heart ever since the girl went missing, she sobbed as she confessed to being the girl’s mother.

She went to the bride after that and revealed to her who her biological mother was. The girl began crying as she processed this shocking information.

According to Times News Now, both women sobbed uncontrollably before embracing one another.

The girl was “happier than the wedding itself” when she finally got to see her biological mother because she was so delighted.

But after learning out that she was the groom’s sister, she grew upset because she was unable to wed him.

When the mother of the groom heard this, she inhaled deeply and cried out to his son, The Groom.

She gave them both an explanation of the matter, according to the Oriental Daily article, and revealed even another surprising confession. The groom was her adopted son, she informed them. Everyone there at this time was shocked. This indicated that the bride and groom had no ties whatsoever and were therefore eligible to get married.

The visitors were perplexed after hearing the extraordinary tale. They did, however, wish the pair a good future together and expressed their appreciation to the family for coming together.

After exchanging vows, the pair began their happily ever after.