Not just emotional but physical harm is also an abnormality of toxic relationships.

Individuals we meet in daily course of life and who are positive leave a positive influence on people. Toxic people when interact with others make them suffer emotionally and physically.

Saying “move on” after a toxic relationship is easier said than live in reality. The repercussions one goes through in an intimate relationship with a toxic individual leave a long trail of bad memories behind. Criticism, judgment and abuse are adverse circumstances and some hard truths we will explain in the context.

How to get rid of emotional attachments to toxic relationships?

A toxic person lacks empathy, compassion, kindness and respect. Psychologists believe that toxic behavior is often linked to one’s childhood experiences. An accumulation of events, especially toxic relationship of someone’s parents, stunt their ability to develop intimate relationships. It is therefore difficult to reverse a person’s toxic nature. An obvious personality trait of a toxic person is the need to control a situation or a person on one’s own terms.

Toxic individuals hunt warmhearted, susceptible individuals for a potential relationship. Such targeted individuals put others first and live by the term of loyalty their whole life, simply put such individuals who have tendency to tolerate someone’s toxic behavior. These potential people are submissive in nature and are often willing to cede control.

Love reciprocates in a healthy relationship; partners give and receive equally. Love is unconditional and requires a drastic change of circumstance to fade. In an intimate relationship, partners feel compassion and respect for each other however a toxic relationship is empty of such intentions.

In the initial stages, a person who is the victim of a toxic individual rationalizes their loved one’s behavior at every front. Afterwards, the meaning of rationalization loses its sense and becomes hard to hold on to but the toxic person takes control of it often by iterating their love. Toxic people will win over their partner by justifying their behavior and linking it to their act of love. 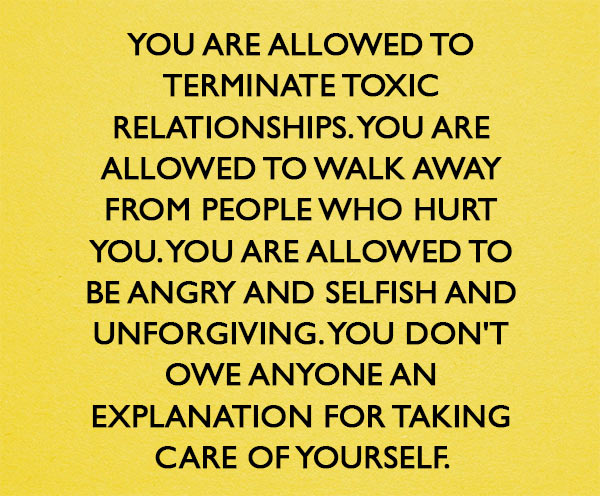 The manipulative conduct turns into an abusive cycle that repeats again and again. It worsens over time as toxic partner shifts blame onto others and held their innocent partner responsible for the worsening of their relationship problems. As their innate nature kicks in, they make the victim believe that they’re too needy, jealous, insecure, weak, foolish, etc.

Love is the purest emotion and relatively straightforward. It’s easy when someone feels it as there is no hidden motive rather little contemplation is required when love received from your family and friends.

People who genuinely feel and live by love never imagine hurting others who they care about. Have you ever witnessed someone who loves you calling you with humiliating remarks? Have you ever felt someone treated you badly who actually loves you?

When an act needs to be justified in respect of love that is not true love and it’s time to part ways. Love must possess qualities that would make it recognizable otherwise it is not love.

Walking away from a love relationship no matter how badly the betrayal was could be the hardest thing to do. Keep in mind a few important things during the separation process: